The family of Maria Garcia, 58, and Alyssa Aisa, 6, has retained Harris & Harris Injury Lawyers to represent them after the tragic loss of life suffered at a Las Vegas RTC bus stop accident on Monday, March 30, 2015.

The two died after being struck by a vehicle, driven by a suspected DUI driver, while waiting at the regional transportation commission bus stop near Maryland Parkway and Sahara Avenue in Las Vegas.

The suspected driver, Leonardo Ruesga, has reportedly admitted to Las Vegas Metropolitan Police Department DUI Officers that he had been drinking alcohol and had also ingested illegal substances prior to the horrific bus stop accident.

A Statement From The Family

“Our family has been overwhelmed with grief during the past few days.  We are devastated, but trying to face this new reality with the help, love, and support of many people.  We would like to thank all the people at the scene of the accident who assisted in any way.  We are especially grateful to the individuals who stayed with our mom, Maria, and our angel, Alyssa, as well as those who pursued the driver when he fled.  We also thank LVMPD and the Emergency Medical Personnel for their quick response and assistance.  We would like to thank UMC Trauma Center for their efforts to save Alyssa and Maria’s lives and to the other volunteers and community members who have helped us.  We would like to thank everyone who has given donations and have given us support through this tragic and difficult time.

We ask that the community stand with us to provide one voice for all the senseless tragic deaths and injuries that have occurred at bus stops throughout Las Vegas Valley by uniting as one to make a difference.  We also ask help to raise awareness of the dangers of driving under the influence.  One split second can change many lives.  How many more lives need to be taken before changes are made?”

– From Maria’s and Alyssa’s Families

Donations to help the family pay for the unexpected funerals can be made at any Bank of the West branch location or by mail to: 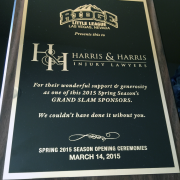 “We are part of the Las Vegas community and giving back is such an important thing,” says Brian Harris.

At the opening day, Heather Harris represented the law firm where she, and other supporters including Commissioner Larry Brown and Councilman Steven Ross, were honored for their commitment to youth activities in Southern Nevada.

“Today was such an amazing day for the parents and players and Harris & Harris is so proud to be a part of the festivities,” said Heather Harris. 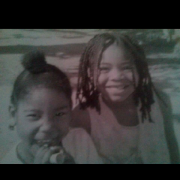 The Families of Kamesha Gilmore and Gabriell Thomas held a brief news conference today to thank the public for the support they have received.

The families are very thankful for everyone that has contributed to the memorial funds and to help with funeral expenses via the following Go Fund Me accounts:

The family of Kamesha Gilmore is represented by Harris & Harris Injury Lawyers. Pictured here are Mesha and Gaby. Although they were not biological sisters, they were always together.

The families of Kamesha Gilmore and Gabriell Thomas will make a joint statement at a press conference on Wednesday, March 11, 2015, at 400 South 7th St. in Las Vegas at 10:00am.

Kamesha, or “Mesha” as she was known to her family and friends, as well as her lifelong friend Gabriell “Gaby” Thomas were both tragically killed on March 5th, 2015. The collision that took their lives occurred at the intersection of Boulder Highway and Russell Road and was caused by a suspected drunk driver.

Heather Harris of Harris & Harris Injury Lawyers adds: “Mesha and Gaby were just beginning their lives when they were abruptly and unfairly taken from us. Although many are grieving, their families have been struck with a permanent blow by the death of their children—the worst imaginable outcome for any parent. Mesha and Gaby should not have lost their lives because of the actions of one reckless individual. Although we cannot return Mesha and Gaby to their families, we will make sure justice is served in every possible way.”

The families are coordinating funeral arrangements for Mesha and Gaby.

After an injury from an accident, the damaging impact to your health and future can be overwhelming and life-altering. At Harris & Harris, we know how to protect our clients by aggressively preparing every case from the start.

What sets Harris & Harris apart from the rest? Take a look at a case we recently settled for a seriously injured client. Our client, Lucas, took pride in supporting his family. One afternoon, Lucas was driving home after a long day at work when a dump truck came barreling out of a driveway and T-boned Lucas’ truck. He had no time to react. His Ford F-150 was flipped onto its side and pushed across an 8-lane road in central Las Vegas. The driver side window shattered and Lucas’ arm was shredded as he felt it dragging across the asphalt. When the vehicle finally came to rest on its side, Lucas was trapped, disoriented, and had severe pain in his arm, neck, and back. He was immediately transported to a hospital where it was apparent his injuries were extensive. Even after multiple surgeries and hospitalizations, doctors have confirmed Lucas will live with disabilities and lifelong pain.

Despite these undisputed facts, the company responsible for the dump truck and its negligent driver refused to pay for the damage it had caused. Lucas was facing a mountain of medical bills, the need for additional medical care, and he lost his job because he couldn’t work. Lucas didn’t know who to turn to for help. He initially went to a lawyer recommended by a friend. Unfortunately, that lawyer did almost nothing to help his case and tried to convince Lucas to accept a fast settlement without anything for future medical bills.

Offer That’s when Lucas came to Harris & Harris. We quickly recognized Lucas did not have any time to waste. Our lawyers started preparing the case for the earliest possible Trial date. We immediately made sure Lucas got to doctors for his ongoing medical care and pain. We hired the best experts to support Lucas’ case, took depositions, filed motions to narrow the issues, and made sure we were ready for Trial. The Defendants suddenly became more interested in negotiating a settlement. Still, the amount they offered was far too low to cover Lucas’ medical costs, suffering, and future care needs. The Defendants became more anxious to settle when they realized they were not ready for Trial and offered nearly triple their prior offers to settle the case—a vast increase, but still barely covered Lucas’ medical bills.

During the first two days of Trial, the Defendants finally realized their wrongdoing and the extent of Lucas’ injuries. The Defendants also realized they had no evidence and no experts to support their Defense theories. They offered nearly $5 Million Dollars if Lucas would settle the case. Lucas accepted their offer and now he will be able to get the medical care he will need for the rest of his life.

Sometimes, Defendants simply don’t want to take responsibility for their actions, no matter how obvious it may be to everyone else that they are at fault. Some law firms take the approach that a Trial is unlikely, so why make the effort to prepare? At Harris & Harris, we know from experience that preparing every case as if it is going to Trial is the only way to be sure a Defendant will accept responsibility and pay an injured victim what they are legally entitled to receive. In Lucas’ case, and in every Harris & Harris case, we do everything possible to protect our clients’ time, money, and health.